I had the bottom and went looking for a top at the weight I knew (from my New Beats research which shows a 2:3 weight ratio) should work well. 60s 14" cymbals are plentiful and inexpensive. You won't be likely to find one with THIN ink although they do exist. This is a 776g example 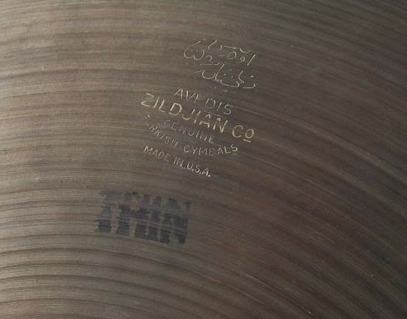 Reconstructing weight classes means finding these occasional cymbals which still have their weight class ink. So if you do find a cymbal and there is any weight or model ink, please do let me know. Every new data point helps.
Click to expand...

Interestingly, your favorite pairing is quite close to what I have discovered I like. I can't remember the exact weight of my Zildjian bottom, but I believe it is somewhere between 1050 and 1120 grams. I have the exact weight written down at home and can post it when I get home from work today. That said, I really have no idea what model the bottom is, although now I wish I knew. I got it in Hong Kong in 1974 when I was young, and I don't recall any stamping or even categorizing of any Zildjians in the stores. I just remember that in those days, you either bough a Zildjian or you bought crap. It was recommended to me by the salesperson as part of a pair that included a UFIP top that I'm pretty sure weighs in at 828 grams. In fact, I rembember insisting on a Zildjian top, wondering why the guy was saying I should get the UFIP top, until he set them up som we could compare them. When we compared the two, the UFIP sounded better. And, it still sounds great, and has good action, but at 13 and 15/16", it is ever-so-slightly smaller than my 14" bottom.

The problem with this size combination is that this tiny difference results in sticks getting chewed up at an amazingly quick rate from catching the edge of the slightly larger botton that sticks out a bit. Hence my search for a 14" A Thin Crash. While the A Thin Crash is actually 14 and 1/8" (well, at least the small A and Large A series are), a slightly larger top is better than a slightly larger bottom because the angle of the protrusion of the bottom edge, not the top edge, is what eats sticks.

The Large A Thin Crash I referenced in my original post was a bit lighter at 820 grams, but I remember it sounding nicely "pronounced" when hitting it when closed, and it had an awesome fan/bark. I attribute the more "pronounced" sound as due to my UFIP having a slightly dark timbre to it. I actually posted in a different thread my findings when I tested that A Thin Crash as a hi-hat top. But, at the time I was looking for a crash not a hi-hat top, and that A Thin Crash didn't fit what I was looking for. It wasn't until quite some time later after I got some A Mastersounds that I realized the stick-chewing was from my original hats, because sticks started lasting years again when the Mastersounds were on the kit. I now actually have a set of A's and an almost brand-new set of A Custom Mastersounds, but the A Customs ended up having too sharp of a sound for me, so I'm in the process of selling them and they're in brand-new condition from me playing on them for less than an hour before putting them away. I might sell the A Mastersounds, too, once I find the right top to replace my UFIP (but I will never sell the UFIP).

I did consider having my bottom hat diameter shaved a bit, but I don't want to ruin it. I've tried so many combinations, between that circa 1974 bottom and both Mastersound bottoms that I have, and it seems like no matter what top or crash I put with what bottom, that 1974 bottom makes any pairing sound significantly better. It's actually ironic that I know this now, because prior to my trying different things out, I would never have thought a hi-hat bottom makes such a difference, which I'm sure you have discovered, too!
2011 Mapex Saturn - 8, 10, 12, 14 fl, 16 fl, 22x18
1974 Tama Royalstar - 8,10,12, 13,16 fl, 22x14
M

I had the bottom and went looking for a top at the weight I knew (from my New Beats research which shows a 2:3 weight ratio) should work well.
Click to expand...

MrLeadFoot said:
What are the measured diameters of your top and bottom? Are they the exact same size?
Click to expand...

Yes my 14" top and bottom are the same size to within measurement error, and they match up nicely. I also happen to have two 14" UFIP Crashes from what is now the Class Brilliant Series. These come from before the time when the Brilliant Series was separated out so they are labelled Experience. I can't remember what year that happened although I've probably got it in my notes somewhere waiting for the wiki pages for all cymbals Italian. The UFIP crashes are 750g and 805g. The 805g is about 0.5mm smaller than the 750g. The 750g is 14" and matches up with my A Zildjians. The 850g is ever so slightly smaller then the A Zildjians. The complication with Italian cymbals (as well as Chinese and Turkey) is that the manufacturers seem to target metric sizes and they are often undersized. For UFIP this might have stopped in the 1990s but I haven't really looked into the time frame for that. 14" is a diameter which converts to 355.6mm so when a manufacturer targets 355mm they are very slightly undersized. The undersizing effect is different depending on the diameter and the actual target in mm. Studying the diameter ink on cymbals can give us some insight when the ink has both inches and metric. But I've got examples where the nominal measurements given in ink

tell you that if those were accurate they cymbal would be 5.5mm undersized, but it isn't that much smaller than true 14". And for a larger UFIP example there is a

This is one reason why there are lots of slightly undersized cymbals out there.

I also have some late 1950s 14" A Zildjian flange hats and they are slightly oversized compared to the nominal 14" diameter. When I match either of them up with one of the 1960s A Zildjian hats they are 1.5mm larger all around. My hats aren't the only slightly oversized 1950s A Zildjian cymbals I have, and they aren't the only ones I've documented from other people's collections. I also have a mid 1950s 14" A Zildjian cymbal (Trans Stamp 3) which is slightly undersized and is about 1.5mm smaller than the 1960s A Zildjian hats. Diameters weren't perfect and the further back you go the more likely you are to find diameters which aren't exact.

All of these diameter differences are within 0.1% of the target diameter and we're studying manufacturing tolerances.
Steve Black aka Zenstat
Cymbal Wiki || A site about cymbals
Black.net.nz || An older site to be incorporated into the Wiki
M

Reverb is a marketplace bringing together a wide-spanning community to buy, sell, and discuss all things music gear.

This is a nice bright cymbal with relatively fast decay. Ships free👍 And the Continental USA. Sales are final 2020. God Bless America!🥁

Link to FB of my project Quivermore

MrLeadFoot said:
How does it compare to the sound of the A line? Although I have not heard one in person, I'm thinking it has more of a metallic sound.
Click to expand...

The S series sounds to me like they have less body (more pshhh) than the A and K series. Like the mids being scooped out and the highs turned up.
Last edited: Aug 29, 2021
Tama Starclassic Maple / DW Performance / PDP Concept Maple / Zildjian

MrLeadFoot said:
Can someone please tell me when and why the heck Zildjian would do away with the 14" Thin Crash??!! Like I'm supposed to buy an S series 14" Thin Crash in lieu of the A series. Yeah, right! WTF?!!

Ok, I'm done now. Off to look at what Sabian has to offer. I was looking for an A Thin Crash to use as a Hi-Hat top. Maybe HHX is closest to the A Zildjian line?
Click to expand...

Try an A fast crash.
I'm using one with a mastersound A bottom.
Works quite nice.
Ludwig Classic Maple ,Pearl MCX ,Gretsch Renown,Yamaha Stage Custom and many many Fibes snares.
M

I had the bottom and went looking for a top at the weight I knew (from my New Beats research which shows a 2:3 weight ratio) should work well. 60s 14" cymbals are plentiful and inexpensive. You won't be likely to find one with THIN ink although they do exist. This is a 776g example

Reconstructing weight classes means finding these occasional cymbals which still have their weight class ink. So if you do find a cymbal and there is any weight or model ink, please do let me know. Every new data point helps.
Click to expand...

MrLeadFoot said:
Do you happen to know how much difference there might be between the hollow logo models that sport "THIN CRASH" on the front vs. the solid logo models that also say "THIN CRASH" on them, but have no large or small "A"? For example, is the solid ink simply a change in their logo stencil, or are they significantly different in metal composition, shape, lathing, etc., such that if I mix a solid ink version with my hollow logo crashes, it will sound out of place?
Click to expand...

I'm still in data collection mode and haven't yet been back for more analysis. There are no changes in metal composition and no big lathing changes. There might be small shape differences. We know that because the 2013 reset specifically mentions lower weights and lower profiles

but we don't have much more detail on a model by model diameter by diameter basis. Paul Francis also mentions more taper (thinning towards the edge) on some crashes. But that's all I've got. Other than that you will have to hear the cymbals together to know if they blend nicely. I know it is a pain to have do a capture and release program to find just the right one, but that's the state of play as far as I know.
Steve Black aka Zenstat
Cymbal Wiki || A site about cymbals
Black.net.nz || An older site to be incorporated into the Wiki
M