My name is Tony and I'm actually not a new drummer world member! I joined the forum back in 2006 as a fresh faced 18 year old, posted for a few years and then life got in the way I guess... The last time I signed in was over 8 years ago. I thought it was about high time I sorted that out. Sorry for the upcoming essay but I've had a lot to write about.

Although I've been quiet on the forums, my drumming life (and regular life!) has been anything but and I've been involved with many projects during this time frame.

Quick synopsis about me - I'm now 31 years old, from the UK, an IT systems engineer by trade, have a wonderful wife, a dog and 2 cats. Drums/Music is still my main passion in life and has been for 20 years now (gulp!), although I have an equally expensive and time consuming hobby in the form of cars too. My wife is very understanding & one in a million!

Enough about me, this is a drum forum after all. Back when I was last active on the forum, I was in a originals metal band called 'Breathe New Life' and had in my possession 2 lovely Mapex Saturn kits, one kit for the road and one kit for home. Well with BNL we ended up recording an album although it was a very localized release on CD and I think has long since dropped of iTunes. I still have several copies for sentimental purposes but the experience of playing metal & furthering my technique was very addictive and when BNL dissolved later in 2011, I wanted to continue down that route and with the BNL guitarist, I joined a metal band called 'Bury All Rivals'.

A quick break in text for a couple of pictures. This is my sorely missed Mapex Saturn III in silver sparkle which I used to record the album with BNL. 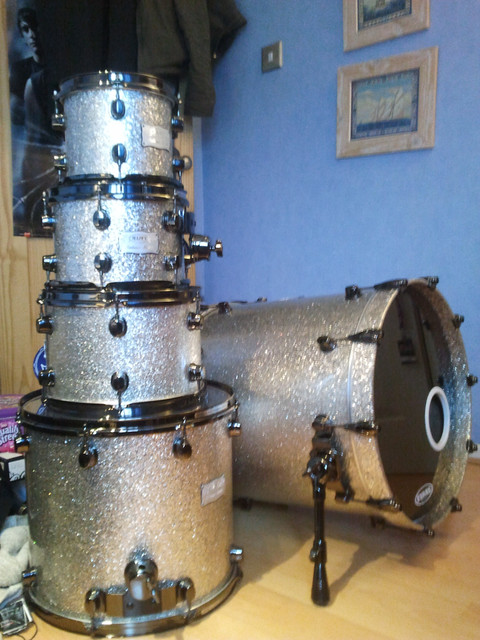 I've always loved the sound of the Mapex Saturn, hence why when I wanted a kit for home to leave set up I ended up buying the second one! They've got a lot more expensive in recent years, I seem to remember this 5 piece kit costing around £1200 which was brilliant value considering the sound and build quality.

Moving on... So, after I joined Bury All Rivals we set to work writing some new material and getting ourselves gig ready. We wrote and recorded a new EP, some of which is still available online if anybody wants to have a listen (don't judge!):

This material was quite well received in the UK music community and we got some radio airtime, and on the gigs front a supporting slot for a band called Funeral For A Friend who some of you metal heads might have heard of. Due to other commitments from all members including myself, the band split after only about a year. I bought my first house around this time and it sapped all of my time & funds which was a shame as I really enjoyed this band. Another unfortunate victim was my Silver Sparkle Saturn's who had to be sold as my parents were moving also and I simply did not have the space to store them. My other Galaxy Blue Saturn III kit survived however, and remains with me to this day (more on this later).

After a brief musical hiatus I was chomping at the bit to get back behind the kit and ended up joining a local melodic post-hardcore band called 'All At Sea' whose drummer had just left after they released their debut EP. These guys were a way more professional outfit and I was unsure whether I would fit the bill as a keen amateur but we gelled together really well and I enjoyed a decent tenure as their sticksman until the band went on hiatus in 2015. We've actually recently come off hiatus and are planning some shows later in the year.

With All At Sea we got decent radio playtime, recorded a new EP at Outhouse studios in Reading, did loads of shows, went on tour and even played a sold out show at the O2 academy in London Islington which remains the highlight of my drumming 'career'.

Drums wise during this time I used my faithful Mapex Saturn III in Galaxy Blue Burst. As I was in metal bands when I bought this kit, it was used originally in a 7 piece config like so: However, carting this lot around in a Fiat Punto proved a bit tiresome and unnecessary and I simplified the setup by ditching the PDP drum rack and just going with double braced cymbal stands and going from a 7 piece kit to a 4 piece with wayyyy less cymbals. This is the setup that I continue to use to this day. I sometimes chop and change my cymbals and sometimes I will use the 10 inch rack instead of the 12 but you get the idea. 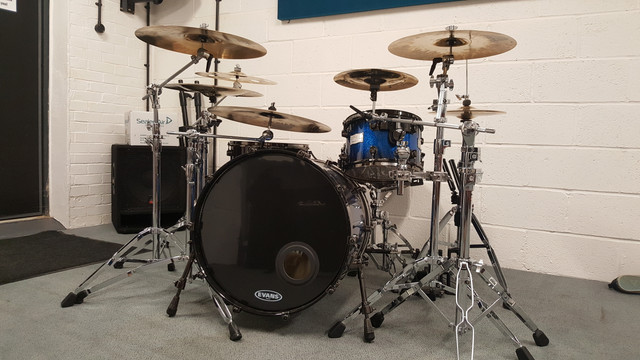 If anybody wants to check out the music from All At Sea here are a couple of links:

My first ever music video!

After All At Sea went on hiatus towards the end of 2015, I dabbled around in a few small projects for a couple of years but nothing very serious. During this interim period I also got a bit bored and spent a large portion of my christmas bonus one year on a lovely Acrylic DW Design kit including matching snare drum.

The DW Acrylic kit is a funny thing really. There is no denying it looks incredible under a bunch of stage lights and it sounds amazing when its mic'ed up but in smaller venues or a practice room, I find it sounds a bit...dull?! For this reason, it comes out to play on special occasions. In 2017, I ended up joining a London based metalcore outfit named 'Iridium'. Super nice guys, I recorded a couple of tracks with them but ultimately me being 10 years older than the rest of them, and differences in whether we wanted to do music full time meant I eventually stepped down. As much as I love drums, they don't earn me much money!

Here is a track which I recorded with Iridium:

While in All At Sea, we got friendly with another band called We Were Lions, who later changed their name to 'Counties'. In 2017, I expressed an interest in joining Counties as they were having some issues with their drummer and I knew we got on well. I went for a few practices with them but in the end it worked out me not joining them and them continuing with their drummer, Tom. Sadly, early in 2018, Tom became one of the many young men who take their own life due to mental health problems. The guys in the band, obviously heartbroken at the loss of their drummer, friend & brother, decided to continue making music in his honour, and I became their new sticksman.

Its a funny situation to be in, the replacement drummer for somebody who has died. I can't explain it fully but each show I play with Counties, I feel like I have to do it justice to Tom. I almost felt like a stranger in the band at first, but this has now passed and I definitely feel part of a band of brothers, but Tom will always be part of it. In 2018, we did a run of shows, including some charity fundraising for mental health charities and we are now in the writing stages of fresh material. As this was my 30th year I also treated myself to a new 'live' kit in the form of a Tama Starclassic Birch/Bubinga. Its stunning. 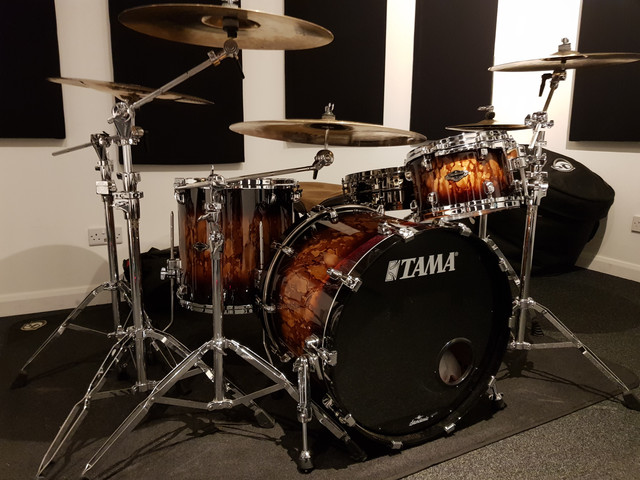 So here we are, in 2019. I'm drumming for Counties still, we've just released a new single last week which is my first featuring with the band.

Luckily in both Counties & All At Sea, these bands practice & gig often enough to quench my musical appetite, without ever being a burden on the other aspects of my life. I hope I haven't bored you to tears with my ramblings so I'll just leave you with a breakdown of all of my gear!

Snares wise I have loads but my main 2 are pictured here: 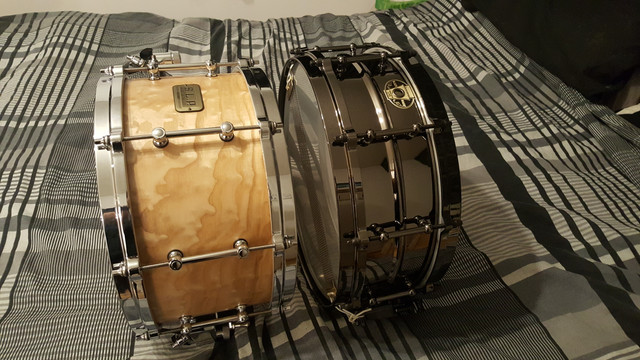 I've had to split my thread into 2 parts as I ran into a character limit. Here is the last bit which is all my kit specs!

Well welcome back to Drummerworld for a second time. Nice kits you have there.