Opening for a famous band

The progression for many local bar bands is gigging for yourself and then opening occasionally for once famous but now not famous bands.
No, I haven't done that.
Just another garage band drummer with some basses.
B

We were asked to learn 2 of his songs from back in the day. We played a short set, then played one of his songs, and then he and the actor who played him in the film came out and played the last one with us. Interesting gig. Here's a newspaper write-up of it. 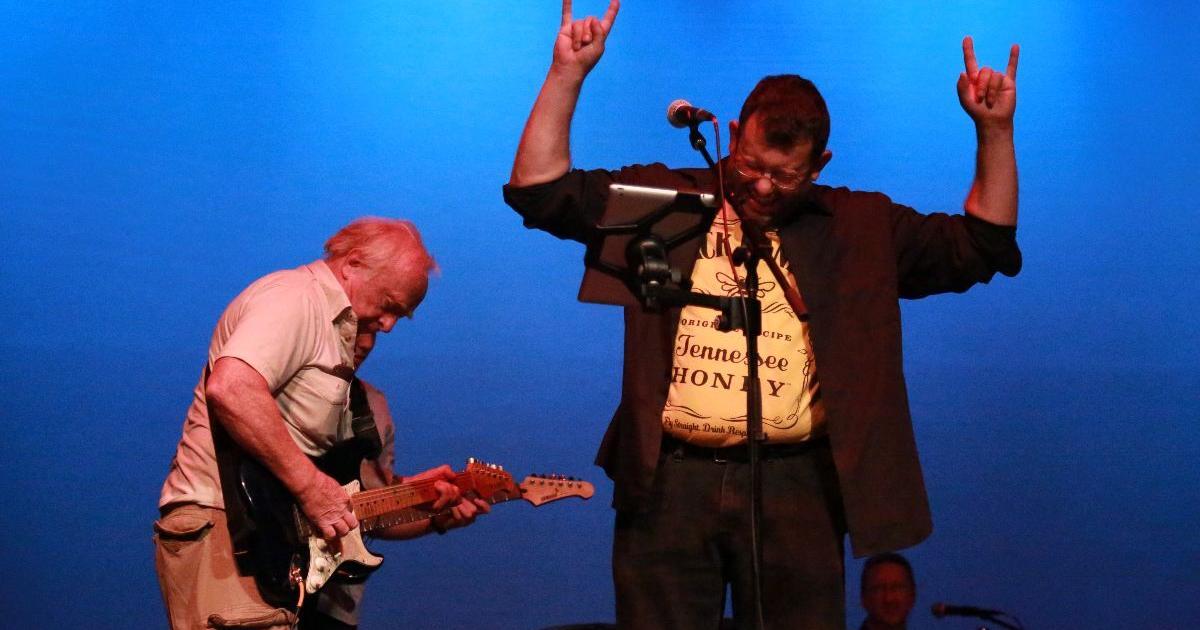 ELLSWORTH — Brendan Haines was in music college at the University of New Haven in Connecticut when he came across a job posting with two main requirements: have red hair

The first to come to mind was going on prior to Mark Farner and friends. Other members of Marks friends were Pat Travers..the drummer in Cindy Laupers band and Ted Nugents bass player at the Abate of Iowa motorcycle rally. Didn't meet any of the musicians. I didn't want to act like a kid knocking on trailor doors to tell Mark how much GFR meant to me growing up. He may have looked at me saying..im sorry..i bought girl Scout cookies last week. 😃.

Focus was very cool. Too bad Thijs and Jan can’t get along with each other, but they did some great stuff that sounds like nobody else.
"Click? I AM the #$%@&^# click!" --- Ringo *

The biggest name was Paul Rodgers, with special guest Slash on guitar.

Only "opening" claims to fame were Hootie and the Blowfish in clubs when they had their first song out and then Soul Asylum as their "Runaway Train" was on it's descent........both in the 90s of course.
Know a little about a lot, and a lot about a little
S

Back in the 90’s, my band opened for a couple of relatively known bands. Black-47, and The Mighty Mighty Bosstones.

More recently, my band has opened for Lenny Kravitz and Billy Idol.

my surf-punk/lo-fi/garage pop band - Go Robot, Go! - opened up for Howard Jones in C-bus, Fountains of Wayne in NYC (right before Stacy's Mom got famous), and were asked by David Byrne to open up for him in Columbus and Indianapolis <---those were the largest audiences i ever played in front of

my early 90's metal band opened up for Type O Negative when they were still touring in a big white van; we also were "the/ a local opener" for Fishbone; Dream Theater on Images and Words; Soulfly; In Flames on the Clayman tour. These were all at The Alrosa Villa

my current metal band was supposed to be the first band on for Damage Plan at The Alrosa Villa the night that Dime got shot. We had to bow out of the show about a month before b/c our singer was "otherwise occupied" with the law due to bad decision making....I was still at the show with friends

in college, I got to play with and for Wynton Marsalis when he was in residence for a week. We had been doing a bunch of Thad Jones charts, and I was floored when, after running a few phrases, he stopped us, pointed at me and said to the group:: "y'all gotta get on his time; he's in; he's got it"....I don't think I heard another word, or sound for the rest of the practice!!!
1955 Ludwig
1994 Pearl Masters Custom maple
Zildjians from 1945-current
Remo Heads

"This isn't Jr. or Sr. High school. You are warned, and then you comply or say goodbye." - GruntersDad

"Looking, playing, and listening"
is the only path to finding what you want. - C.M. Jones

"Dynamic command flows from the limbs, not from the gear." - C.M. Jones

Not me, but a friend opened for Collective Soul.
My music and other creative projects - www.vainastudios.com

mikyok said:
After long abandoning any ideas of being a rock star, at the grand old age of 38, it's the first time I've ever supported a known band.

It's at a hot air balloon gala and has all the hallmarks of Puppet Show featuring Spinal Tap. Can't wait!

Has anyone else done any interesting supports down the years?
Click to expand...

So you are going to play with the well known Jan Akkerman. When i lived on my native island Curacao i played in a coverband and he came over and we did hocus pocus with him

Rhythm666 said:
So you are going to play with the well known Jan Akkerman. When i lived on my native island Curacao i played in a coverband and he came over and we did hocus pocus with him
Click to expand...

...all I can think of at the moment

I bought that One Chord to Another double album. Awesome!

Years ago, I played in a funk fusion band, and we opened for Chuck Berry.
Then Chuck Berry had a really bad band I must say, and he told the promoter that he wanted to play with the drummer from the support band.
I got to meet him, and I said I thought I didn't know his music well enough to play it on the spot, but he replied that he didn't care, he was tired to hear the same mistakes night after night, and he just wanted a drummer who would make other mistakes.
Anyway, he was also asking the promoter to pay more money or he wouldn't play at all, and long story short I didn't play with Chuck Berry that night and I was glad I didn't ;-)
Alain Rieder
Time Manipulation Drum Book
Shop
Time Manipulation ebook at Hudson Music
YouTube Channel
Blog

mikyok said:
Alas he's not with them anymore
Click to expand...

But Pierre is, still a monster drummer!

Loretta Lynn and one year later, Tammy Wynette. This was in the early 80's, crowd size was about 5K people and the first time I had played to more than about 250 folks. Umm yeah, I was pretty nervous... but we did well. BTW both singers were ultra nice and and their crews were super helpful getting us set up.
4

Opened for Hole many years ago. They decided to cancel last minute and the club owner wouldn't refund tickets. We played to 1,000 teen girls in baby doll dresses throwing lighters at us.

How about the other way around … famous bands that have opened for your band? 😎
B

Seafroggys said:
Not me, but a friend opened for Collective Soul.
Click to expand...