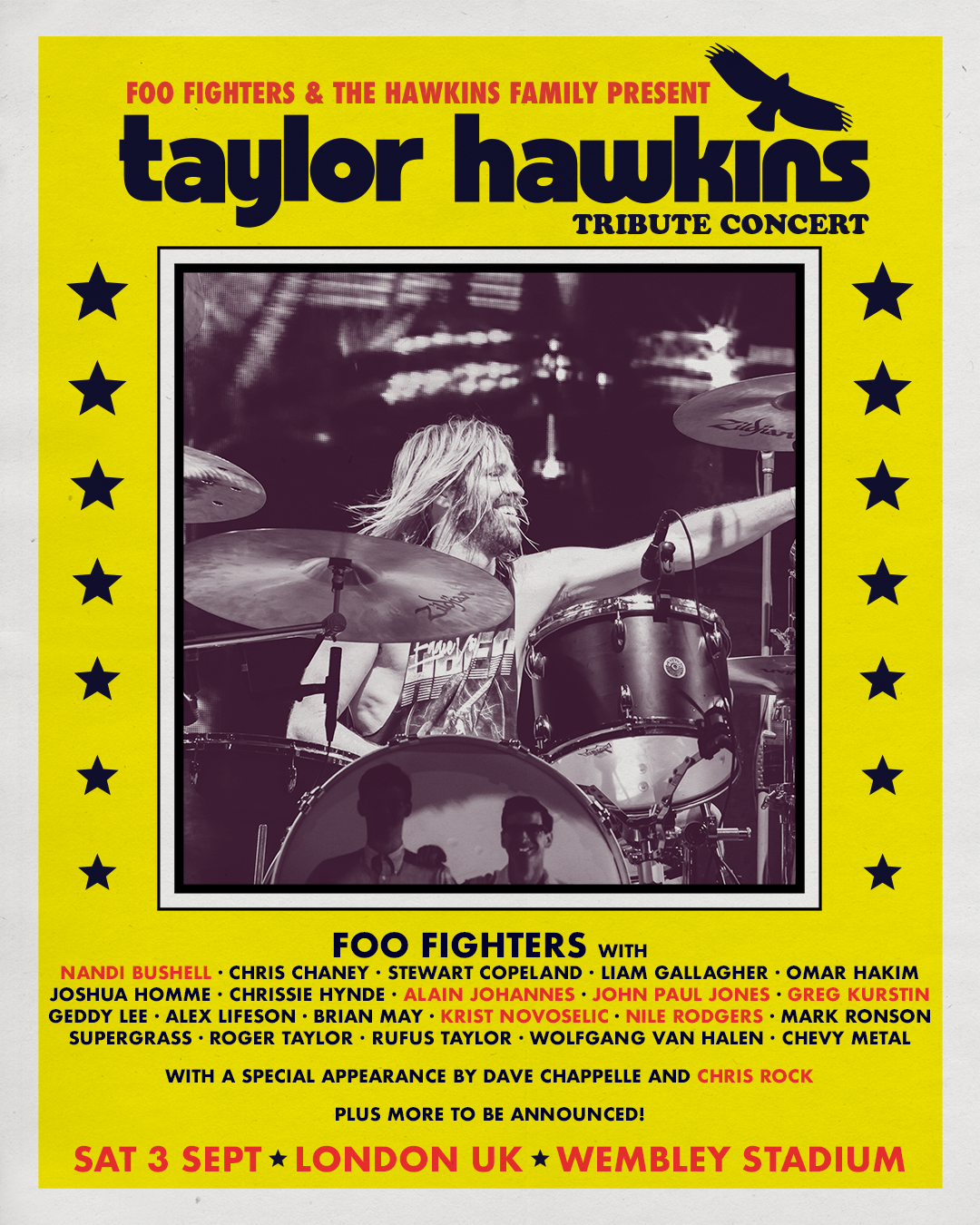 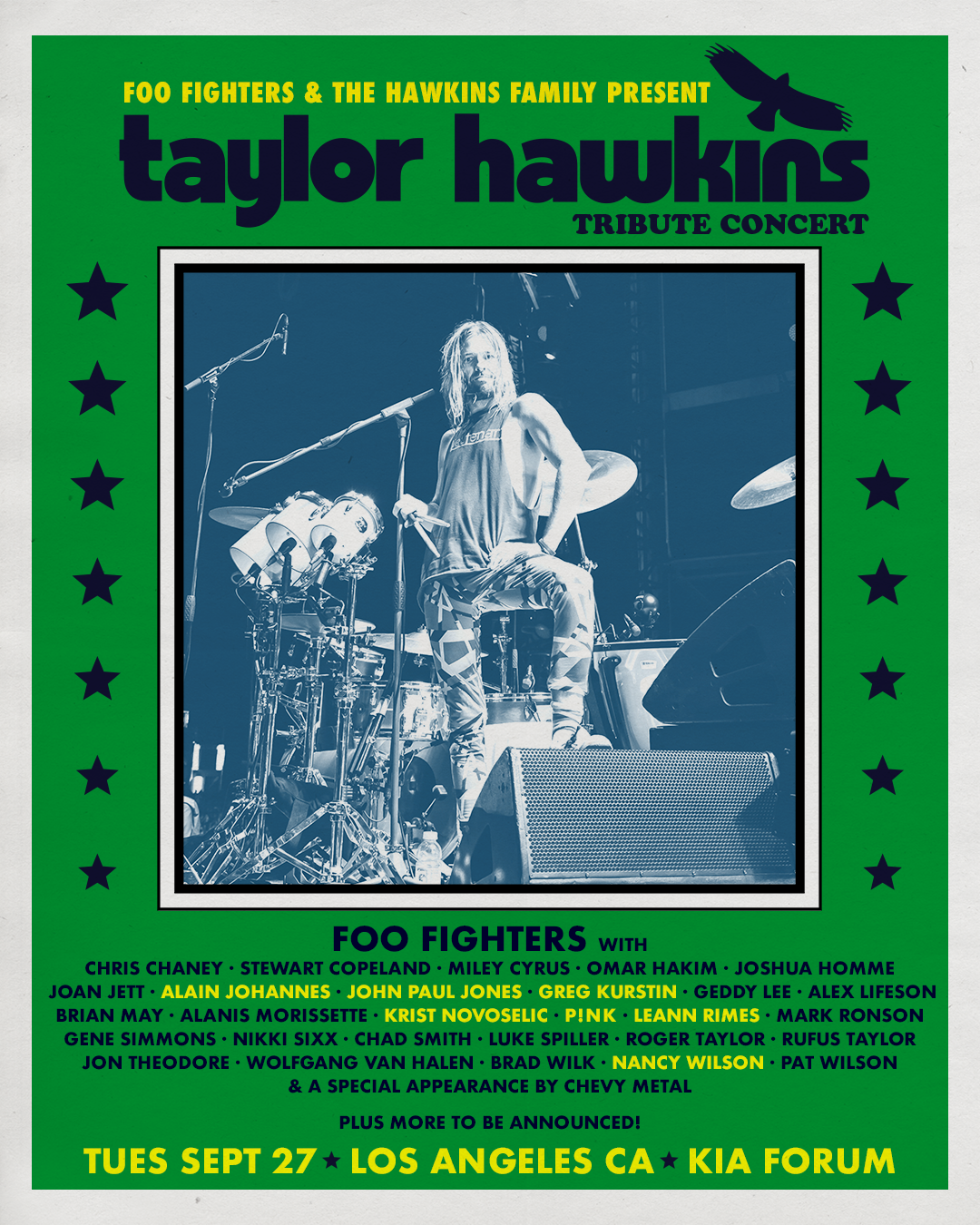 Link to FB of my project Quivermore
G

“Music is a powerful connector and we are honored to commemorate Taylor Hawkins’ enduring legacy,” Paramount CEO Bob Bakish shared in a statement. “From our broad mix of platforms to the universal strength of our brands, Paramount is uniquely positioned to maximize the reach and impact of content worldwide, and we look forward to sharing this meaningful music experience with audiences across every touchpoint.”

Glad to see Alex and Geddy there.
Why are some names in different color text than others?
Who is in the picture on Taylor's bass drum reso?
Louis

opentune said:
Who is in the picture on Taylor's bass drum reso?
Click to expand...

It's from Revenge of the Nerds

opentune said:
Glad to see Alex and Geddy there.
Why are some names in different color text than others?
Who is in the picture on Taylor's bass drum reso?
Click to expand...

I think those are the ones who play only in one city (Los angeles, in that case).

The London show has just finished and a sad reason to have such a good show, quite emotional in places. We watched most It at home on the TV.

Geddy Lee and Alex Lifeson played 2112 & Working Man with Dave Grohl and then YYZ with Omar Hakin. Great to see them playing Rush materiel again, even if maybe a one off.

Paul McCartney also did a short set, as did Queen. As did Lars Ulrich playing AC/DC songs with Brian Johnson.

Foo Fighters had a number of guest drummers during their set, Josh Freese, Travis Barker, Rufus Taylor, Nandi Bushell, Omar Hakin but emotionally of all Taylor’s 16 year old son Shane, who fittingly played the drums on ‘My Hero’.

The boy plays and hits exactly like his dad, and then some.

I think Dave Grohl played with every band, from playing the drums, bass, guitar and vocals. About 7 hours of playing. He must be absolutely done in physically and emotionally.

Sad reason to have so many good drummers but a fine celebration of his life, all the same.

I’ll also be watching the LA show if it’s streamed as it was fine tribute.
Last edited: Sep 3, 2022
https://open.spotify.com/artist/4zOjpXENu073aQlQw837xm?si=gGVrOvnjS7udXPBcSr2uhQ

I caught the end. Very nice.

I'm looking forward to bits and pieces showing up on youtube.

Looks like Dave tried to slow him down when he looked to be loosing a bit of energy but the kid was having none of it!! Good on the lad.

I always thought IF Geddy and Alex ever got back together, they would select Taylor Hawkins on drums. With Taylor passing, that can't happen. But this tribute about had me in tears...R.I.P. Neil Peart, Taylor Hawkins, & John Rutsey.

I've followed Taylor from the beginning. From his love of Captain Beyond and his choice of kits with all of the interviews I've always felt a connection with Taylor. His smile on stage was something I marveled at. I remember Dave Grohl saying that Taylor was thee drummer for the Foo. 100% from my view as well. Wish I could have met and talked personally with him. He's on my mind alot.

opentune said:
Glad to see Alex and Geddy there.
Why are some names in different color text than others?
Who is in the picture on Taylor's bass drum reso?
Click to expand...

They should get Josh Freese. He absolutely crushed it. And he can sing pretty decent, though I never see him sing with any bands, only on his solo stuff.
"Click? I AM the #$%@&^# click!" --- Ringo *

Just been watching some of the footage of Hawkin's son. He can really play and he sounds just like his Dad. I have to say, I'm very impressed.
PEWFLADCC

Link to FB of my project Quivermore

Watching Nandi and Shane totally shred on drums far better than my 38 year old self can ever do made me feel like I need to just hang up the drum sticks for good lol.

What I found really touching is how many other musicians who have passed away were directly to subtly honored as well.

Some were obvious:
Wolfgang Van Halen playing his dad's guitar parts, when he has previously said he wouldn't play his dads parts. And he made it look effortless.
Rush honoring Neil Peart
Queen appearing honoring Freddie Murcurry.

Some were subtle:
Rush not only played two classic Neil era songs but included Working Man from the late John Rutsey era. And they opened with the song Taylor played when Rush was inducted into the Rock and Roll Hall of Fame and ended with a song Taylor has previously played with Geddy and Alex. All while eschewing their more obvious hits.

Brian Johnson didn't just sing his era AC/DC songs, but they included a Bon Scott era song, Let There Be Rock. Plus also a nod to Malcolm Young.

The Pretenders opened their set with a song from their 1st album, which of course featured two members who have long since passed away.

Paul McCartney's presence of course nods back to John Lennon and George Harrison. And his choice to play "Oh Darling!" was interesting, because according to some Beattle fansites I've looked at, he had never ever played that song live before. I've always assumed the song was about the late Linda McCartney (they were dating when the song was recorded).

Pat Smear and Paul McCartney sharing the stage was a very subtle reminder that Darby Crash of the Germs and John Lennon died one day apart.

And then there was the image of Oliva Newton-John on the bass drum head of one of Taylor's drum sets.

Dave Grohl and the organizers seemed to go out of their way to make sure the song selections touched upon as many musicians no longer with us as possible without taking anything away from the focus on Taylor.